The trial of Francisco “Chavo” Romero has ended with the court-ordered rejection of 5 citation tickets issued by the Oxnard Police Department. The “Not Guilty” verdicts are a victory for the Todo Poder al Pueblo Collective in its long-standing fight against OPD brutality, and are a further confirmation of the rights of oppressed communities to fight back against police impunity, harassment, and abuse.

The tickets had been mailed to Chavo in retaliation against his role as an organizer of the October 13, 2013 March for Justice commemorating Oxnard residents who were killed by local police.  Romero, a long-time community organizer, founding member of the Todo Poder al Pueblo Collective, and member of Union del Barrio, was singled out from a crowd of hundreds in attendance for these so-called “offenses.”

In the decision, Ventura County Superior Court Commissioner Anthony J. Sabo noted that the Oxnard PD reasoning for giving Chavo 5 citations wasn’t consistent with their own “Incident Action Plan” distributed to officers. The Judge also explained, “The Defendant’s extensive background in the organization of marches, his appearance in the videos of appearing more focused on the safety of the demonstrators than in demonstrating himself, and the prior police knowledge and preparations for the event make the factual context very different than if a lone individual… had committed the violations.” In fact, the tickets were given precisely because of Chavo’s reputation throughout Oxnard and Southern California as an outspoken member of Union del Barrio/Todo Poder al Pueblo, active in the fight against police/migra violence, gang injunctions, checkpoints, and injustice.

The October 2013 march was organized by the family of Alfonso Limon, Jr. to mark the first anniversary of his death at the hands of the Oxnard Police Department. The families of Robert Ramirez, Michael Mahoney, and other victims of police killings from as far as Anaheim and the Bay Area were also present at the march, with Todo Poder al Pueblo Collective aiding and assisting. The action began at Colonia’s Del Sol Park and snaked through Oxnard to the OPD station, returning to Del Sol Park via Oxnard Boulevard. OPD admitted that no property damage took place throughout the unpermitted action.

Court proceedings began in December 2013, with representation provided to Romero by the Law Offices of James P. Segall-Gutierrez. Since then several police officers, including members of the Chief Jeri Williams’s staff, have taken the stand to give testimony. In the process, the Collective and the people of Oxnard have learned several important lessons. Documents provided by the OPD as evidence in the case have included:

From the beginning of community protests against police brutality in August 2012, the OPD and Oxnard Peace Officers Association (OPOA) have made several attempts to apply pressure on the collective –  and to our comrade Chavo, in particular – with intimidation & threats aimed at removing our presence from the streets. What the Chief always looked for was a group that would collaborate with her in a fake display of “community dialogue,” as was the case with Voces de la Comunidad (a group fabricated by the OPD & Justice Department Community Relations following the killing of Limon). The Todo Poder al Pueblo Collective believes that these “dialogues” are PR stunts. Police agencies, armed to the teeth and funded disproportionately, can never be “equal partners” with the community members whom police regularly harass, jail, and rob of political power.

In addition to defaming Todo Poder al Pueblo and attempting to isolate us, the Chief communicated her threats of arrest through “community representatives”, local media, and other channels. These threats were ignored by us as we continued to voice our demands through community actions and events.

Similar charges are also presently being challenged by the Todo Poder al Pueblo Collective in a case aimed at organizer Elliott Gabriel, another identified member of the group, who was individually followed and singled out for 2 traffic citations for his role in the April 11, 2015 “Justice for Meagan Hockaday” march. Francisco’s victory in court makes us optimistic in our fight against these baseless attempts at legal harassment.

The court-ordered rejection of Oxnard PD’s 5 baseless tickets against us is one small victory in the fight for justice in Oxnard, Southern California, and beyond. However, the struggle continues against the corrupt system that claimed the lives of Robert Ramirez, Michael Mahoney, Alfonso Limon, Juan Zavala, Meagan Hockaday, and so many other community martyrs throughout the state and the country. If anything, the Oxnard Police Department’s failed attempts at silencing our voices will only strengthen our determination to secure our community’s right to live in peace and basic dignity. 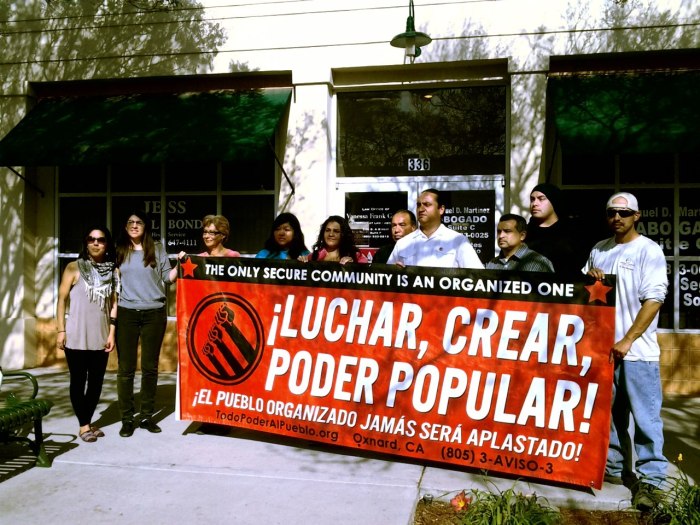