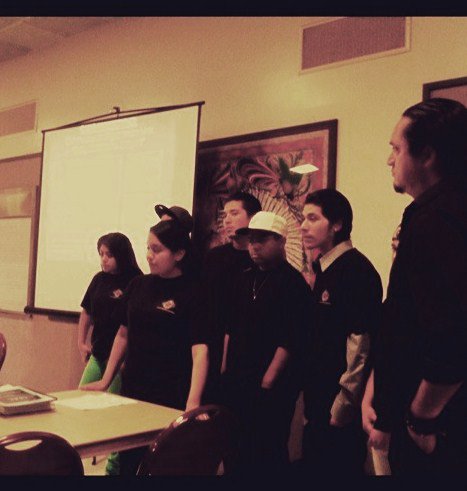 Manauia Youth Group, La Juventud Organizada, welcoming guest speaker Francisco ‘Chavo’ Romero of Unión del Barrio (Oxnard) and the Todo Poder al Pueblo Collective
Report Back: Manauia Youth Group hosts an Informational Community Forum on Gang Injunctions in Santa Barbara, Ca.
~Raza Press and Media Association, Special Report (3/17/2011)
First, a special thanks to the hard work of the Manauia Youth Group for inviting us to present today at the Westside Community Center in Santa Barbara. This was the third presentation in the past 2 years that they have invited us to present on gang injunctions. Tonight, Thursday March 17th, about 50 youth, parents, community members, local organizations and non-profit advocacy groups (PUEBLO, Esperanza, La Palabra) attended the informational presentation on “civil gang injunctions.”
Before the presentation, we met with several youth that had been “served”  by the civil gang injunction and they expressed their concerns about the process and why they were targeted. One young man, shared that he had nearly seven years without having been in trouble with the law. He shared that he has been working and going to school and now, he felt, he was being punished and criminalized. Several parents also expressed sadness and concerns about the injustice of these gang injunctions affecting their sons and daughters.
Francisco ‘Chavo’ Romero of Unión del Barrio – Oxnard, who participated in the community organizing efforts against two gang injunctions in Oxnard from 2004-2006, spoke today for nearly an hour, over viewing the general history of civil gang injunctions, the procedures, and some suggestions for initiating a coordinated, broad, public and vocal response to the gang injunction. He stated, “The authorities are hoping that the community will remain silent, and, that the civil gang injunction will be enacted without any legal or community opposition or response. The last thing they want to see is a youth-led organizing effort with mothers, fathers, and community having press conferences, marches, city council presentations, and packing up the courtrooms as they struggle in defense of their civil and human rights. The authorities and politicians want this all to be swept under the rug. So, get out there and take it to the streets, council chambers, and courtroom, don’t let them silence your call for justice, jobs and education.”
After reviewing the injunction paperwork the youth had been served with in Santa Barbara this week, Romero indicated there was a clear contradiction from what Santa Barbara Police Chief Sanchez stated at this week’s press conference that this injunction would only target the 30 individuals served.  The current petition for the injunction includes the name of the 30 individuals and also adds “Does 1-300”, where police will be able to add names to the list later if the injunction goes into full effect. This is exactly the “new breed” of gang injunctions that have spread across California. It is also most likely that the majority of those served live with the “Target Zones”, which, according to the map we were provided, covers nearly every inch of working class neighborhoods in all of Santa Babara. The “Target Zones” include every single major park in the city limits, all major streets leading in and out of the city, as well as the “Special Events” centers plus the entire beach zone and all of downtown’s State Street and surrounding neighborhoods.
Romero ended by stressing the importance of finding legal pro-bono representation for the youth that have already been “served” as soon as possible so that a legal response can be made within the set forth time. Although this case is a “civil matter” where it is assumed that defendants do not have a right to public defender, Romero informed that contacting the public defenders office is important, where they may be able to assist, because this “civil matter” leads inevitably to “criminal charges” for defendants and will impact the public defenders ‘s office, as was the case with the Oxnard injunctions.
Tonight, various discussion and meetings were set by the Santa Barbara community to regroup to plan out the next stages of this campaign on the media, legal, and community actions.
******************************************************
Click here for the Police press conference:
http://www.keyt.com/news/local/City-Seeking-Gang-Injunction–118029184.html
Click here for local newspaper article:
http://www.independent.com/news/2011/mar/17/ganging-gangs/
Also, some notes and excerpts from Thursday evening’s PowerPoint presentation:
CHALLENGING CIVIL GANG INJUNCTIONS:  THINGS TO CONSIDER-
LEGAL REPRESENTATION:  Immediate efforts to get a legal team to review the injunction paperwork and documentation and to get defendants to challenge and appear for the hearings, litigation appointments etc. Close attention should be paid to if there was community input/participation in developing the injunction proposal (or was it only testimony of police officers, most of which do not live in the community) Also, review language description of Santa Barbara and study if it is an accurate description of the conditions in the community or was it a carbon copy.
“THE FIREFLIES IN THE JAR”: Carefully review the data utilized to develop the case and especially the “DOT MAPS” for the Target Zone.  Incidents over time… clustered together to create a misrepresenting case of “nuisance” and the need for “injunctive relief”.
COMMUNITY ORGANIZING, ALLIANCES & COALITIONS : Grassroots organizing with local youth, community-based organizations, advocacy groups, non-profits working on justice issues, etc. should form alliances and coalition to mobilize support to challenge the injunction. Community input and declarations may be needed during a legal challenge as well to propose actual community-based proposals and alternatives to incarceration/injunctions/criminalization.
For copies of the entire presentation and video, please contact Chavo at: todopoderalpueblo@yahoo.com